We are an
always curious
strategic
–
creative
digital
agency
.
Back
Agency — August 7, 2015

How we created a newspaper in 72 hours 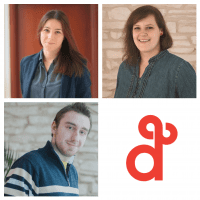 For every Degordian birthday we try to come up with a unique surprise for all of the Degordians – something awesome, something we haven’t done before. This year, we created the Degordian Post!

It’s been a month since we celebrated our 6th birthday, but one thing from that birthday is still present on a lot of the desks around the office and keeps reminding us of that awesome day — the Degordian Post. You see, every year we want to create something truly special for our birthday, something that everybody from Degordian could keep as a memory. This year, we created something least expected from a digital agency — our very own newspaper!

We decided to sit down with Dijana, Lucija and Dorian, the team behind the newspaper, and ask them about the process that led to the creation of Degordian Post.

Dijana, Lucija and Dorian, let’s start with one of the most important aspects of any project. Tell us what was the main idea or the main goal behind the Degordian Post.

Dijana: Our goal was to create something that would include everything one needs to know about Degordian, all the projects we’re most proud of, all of the awards we’ve won and all the things we’ve accomplished throughout the past year. The most important thing was to include each and every member of our team and write something touching about them.

Lucija: Last year our families got personal letters from our CEOs telling how much they appreciate everyone who works in Degordian. This year, the idea was to tell those people the exact same thing, but on a slightly bigger scale. Plus to show the fruits of our hard work.

Dorian: We’re growing really, really fast, and it’s gotten pretty hard to keep track of all of the projects we do. We wanted to create something memorable, something that will showcase what we do, but most of all, something that will talk about the people in Degordian. They are the ones standing behind every successful project and every award we received, without them, there is no Degordian.

What was your first thought when you heard about the idea of creating an entire newspaper for Degordian’s 6th birthday?

Dijana: Taking a part in interesting one-of-a-kind projects doesn’t scare me and I’m always up for a challenge, but making a 24-page newspaper in 3 days with only a handful of people was something new to all of us!

Lucija: First thought? ‘That is an amazing idea, let’s do it!’ and a second after that ‘How in God’s name are we going to do it?!’ But seriously, although I was a bit nervous while thinking how much time we have and how there are just a few of us, I knew we’d do everything in our power to make this project work.

Dorian: The only thing that I could think about is that the creation of the newspaper was going to be a lot like our Startup in 24h project, but with three times as much time and about 20 times fewer people. At that moment I really wasn’t sure if we’d be able to make it in time, but the idea of creating something for everyone in Degordian was the thing that kept us pumped during those 72 hours and pushed us above every obstacle we came across.

This experience truly captured the spirit of Degordian and confirmed, once more, that passion and togetherness, when combined, can make anything happen. Dijana

You said that the most important part of the entire process was the preparation before you started writing. You had to define categories, layouts and the voice of the newspaper. Can you describe it a bit?

Dijana: The weekend before our birthday party our HR room became a real newspaper redaction. With whiteboards full of plans and organizational details surrounding our room, we began our 3-day journalistic journey. And boy, it was a fun one! We also wanted to add a little fun and quirkiness to the reading, so the articles about projects had puntastic titles, we had a joke zone, a crossword puzzle (with the words only someone who truly knows Degordian would understand) and even an article about our furry coworkers, the pets! The only rule when writing these articles was – the funnier, the better.

Lucija: Oh, we had whiteboards for other whiteboards! I’d say the first day was chaotic, as we spent a lot of time figuring out which categories to put in the newspaper and, on the other hand, going through all those materials our HR team gave us. Good thing is, all three of us have good organizational skills so we managed to successfully divide work between us.

Dorian: As Dijana and Lucija said, we surrounded ourselves with all of the whiteboards that we could find in the office and started creating the outline of the newspaper. We defined the categories first and then positioned them on individual pages. After that, it was all about finding the right tone for the newspaper, one that was curious, professional and organized, but at the same time funny and playful — just like Degordian itself.

The three of you were the backbone of the team, but there were a couple of other Degordians who knew about the plan and helped you along the way.

Dijana: Yeah, our content creators became journalists and our community managers and HR assistants became section and photo editors. We even had help from our designers who created all of the graphs, “commercials” and movie posters.

Lucija: Kudos to Tomislav and our HR team! Other than gathering and preparing materials for us, they were great moral support during the whole process — Ana called us and sent numerous e-mails asking if we’re still alive and in need of assistance.

Dorian: Honestly, we wouldn’t make it in time if we didn’t have the support from the girls in our HR department, our designers and our CEO Tomislav. Here’s a little anecdote from the second day that shows just how pumped everyone was about the Degordian Post. Tompa appeared out of the blue with ice creams and his first words were: ‘What can I do to help? I’ll do anything!’ We told him to do a thing that seemed like the biggest time hog ever — searching for photos that would go alongside the text. He literally had to dig through a mountain of photos to find the ones we needed. And he did it without saying a word.

Long hours and red eyes from staring at the laptop screen don’t matter. Seeing people happy and proud of themselves was priceless. Lucija

Every project has challenges that need to be resolved before you put out a final product. What challenges did you face during the creation of this newspaper?

Dijana: The biggest challenge was to keep everything a secret. You see, the making of the newspaper had to be a surprise for all of our employees, and we had to come up with a way to do it discretely. So the only natural thing to do was to make the whole newspaper during the weekend when no one is at the office.

Lucija: Other than the obvious lack of time, the biggest challenge for me was going through all of the materials and selecting the right ones. Everyone wrote such nice things about their colleagues that it was hard to pick just a part of that and make it count. Still, I think we aced that challenge.

Dorian: In addition to keeping everything a secret from the rest of Degordian, one of the biggest challenges was limiting the amount of content we produced to 24 pages. We had so many ideas we wanted to put in the newspaper and it was really hard to leave something out. Who knows, we might even create another newspaper with all of the things we didn’t put into this one.

What would you say was the most important part of the Degordian Post?

Dijana: The newspaper featured people’s feedback about their team members saying what they appreciate the most about them, what’s their best trait and what makes the person irreplaceable. It was really heartwarming to read all of the thoughts and thank you’s from everybody, whether somebody said that the person was devoted to their work and always thrived to do more than is asked of them, or whether they’re fun to drink beer with at the end of the day.

Lucija: I absolutely agree with Dijana. It’s always nice to hear someone appreciates you and your work or says he/she loves to work/have fun with you. Now we all have something we can look at and get that same feeling.

Dorian: Those feedback quotes are, without a doubt, the greatest thing in the newspaper. When you read all the things that people said about each other, you just have to feel great. I have to admit, there were a couple of moments that felt like there’s a bunch of ninjas cutting onions right next to me.

Having people come to me and say that their folks at home loved the Degordian Post makes every single minute of those 72 hours totally worth it. Dorian

Hot off the press, those newspapers were waiting for Degordians on birthday morning. How did they feel about it when they saw it, and how did you feel when you saw everything?

Dijana: The newspapers were served along with chocolate croissants and juice. It was wonderful to see the look of surprise on everybody’s faces! You could tell they were all very pleased to read the kind words their colleagues (and friends) wrote about them. In that moment we knew that all the hard work during those 72 hours really paid off.

Lucija: Someone would think we’d get used to surprises as our HR team constantly tries to do something lovely and touching for us, but they always manage to surprise us with their ideas. And that’s one of the main reasons why I enjoyed working on this project.

Dorian: I got in the office a little bit later than usual and, almost instantly, I got overwhelmed by a flurry of emotion. Everyone with newspapers in their hands, looking for a quote about them, it was pure happiness, that’s the best way to describe it. Everybody wanted to know how we did it, but it’s not just the three of us that made the newspaper, it was each and every one of them. Every single person in Degordian was responsible, because without their hard work, their dedication, togetherness and passion, we would have no stories to write.

Now that it’s all over, what would you single out as a highlight of the project?

Dijana: Next to the feedback quotes, every person had a little bubble saying how many days they’ve spent here at Degordian. The sum of all these days was an impressive 77.000.

Lucija: The fact that we managed to make this thing possible in such a short period of time and the final result – happy and excited people.

Dorian: It’s probably that moment when we got the final version of the newspaper from the printmaker we worked with. When I saw what Degordian Post will look like, I knew we created something that everyone in Degordian will be proud of.

And that’s the story of the Degordian Post. If you still haven’t had a chance to check out our newspaper, check it out now (it’s written in Croatian) and learn more about our team, how we work and how we have fun. And if you have any questions, don’t hesitate to hit us up here in the comments section, our Facebook or Twitter page.